TECH-OVER: AN OVERVIEW OF MERGERS AND ACQUISITIONS IN DIGITAL MARKETS

Companies active in digital markets are remarkably involved in mergers and acquisitions (“M&A”), constantly seeking out interesting start-ups and purchasing them.
One common concern raised by these transactions is that they may have the objective of preventing the target company from ever becoming a competitive threat. This may be especially problematic in the context of digital markets, where, due to network effects, often competition is for the market rather than in the market and where, the competitive threat exerted by small market players or potential entrants is essential to discipline incumbents’ market behavior. Another reason for concern is that most of this M&A activity occurs beyond the radar of competition authorities as the vast majority of these transactions generally do not meet the thresholds that trigger merger control. Indeed, merger control thresholds are often based on the merging parties’ turnover, which are rarely met when targets are start-ups that in some instances are still trying to figure out a viable path to monetization.

For the aforementioned reasons, it is interesting to analyze the characteristics of the M&A activity carried out by digital incumbents to understand whether they reveal any reason for concern. In the context of the ex-post assessment of merger control decisions in digital markets carried out on behalf of the UK Competition and Markets Authority (available at https://www.learlab.com/publication/ex-post-assessment-of-merger-control-decisions-in-digital-markets/), Lear looked at the M&A activity carried out by Amazon, Facebook and Google in the period between 2008 and 2018. Over this period, based on the publicly available information collected, Google has acquired 168 companies, Facebook 71 companies and Amazon 60 companies.

The objective of this analysis was understanding the main characteristics of the target companies and, in particular, what type of economic activity they performed and their age at the time of the transaction. 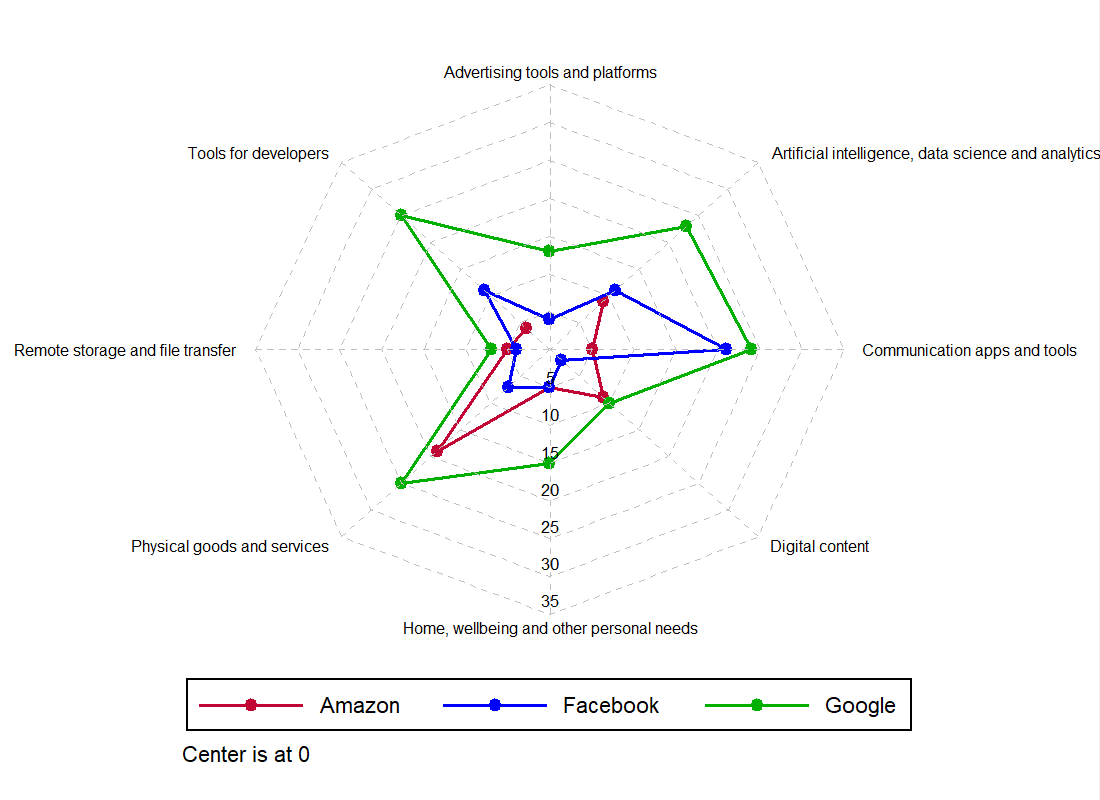 Target companies were grouped in clusters depending on their sector of economic activity. In terms of absolute volumes, Google has been remarkably more active than Amazon and Facebook, having bought out more companies than the other two in each of the clusters, as shown by the figure above. The picture also reveals that Google’s acquisitions have been more heterogenous in nature, whereas:

Amazon and Facebook seem to have focused more on companies that were active in the same area of economic activity, respectively: Physical goods and services and Communication apps and tools.

Some common trends can be identified in the M&A activity of these three companies. All of Amazon, Facebook and Google, indeed, have:

Another striking feature of the acquisitions carried out by Amazon, Facebook and Google is that their targets are often very young firms. While there are some outliers, targets are four-year-old or younger in nearly 60% of cases. The median age of the targets, however, is slightly different across the three companies: 6.5 for Amazon; 2.5 for Facebook; and 4 for Google.

The competition policy implications of this analysis are the following:

ICA’s decision in I811 set aside by Administrative Tribunal

Webinar on the “Ex-post economic evaluation of European competition policy”